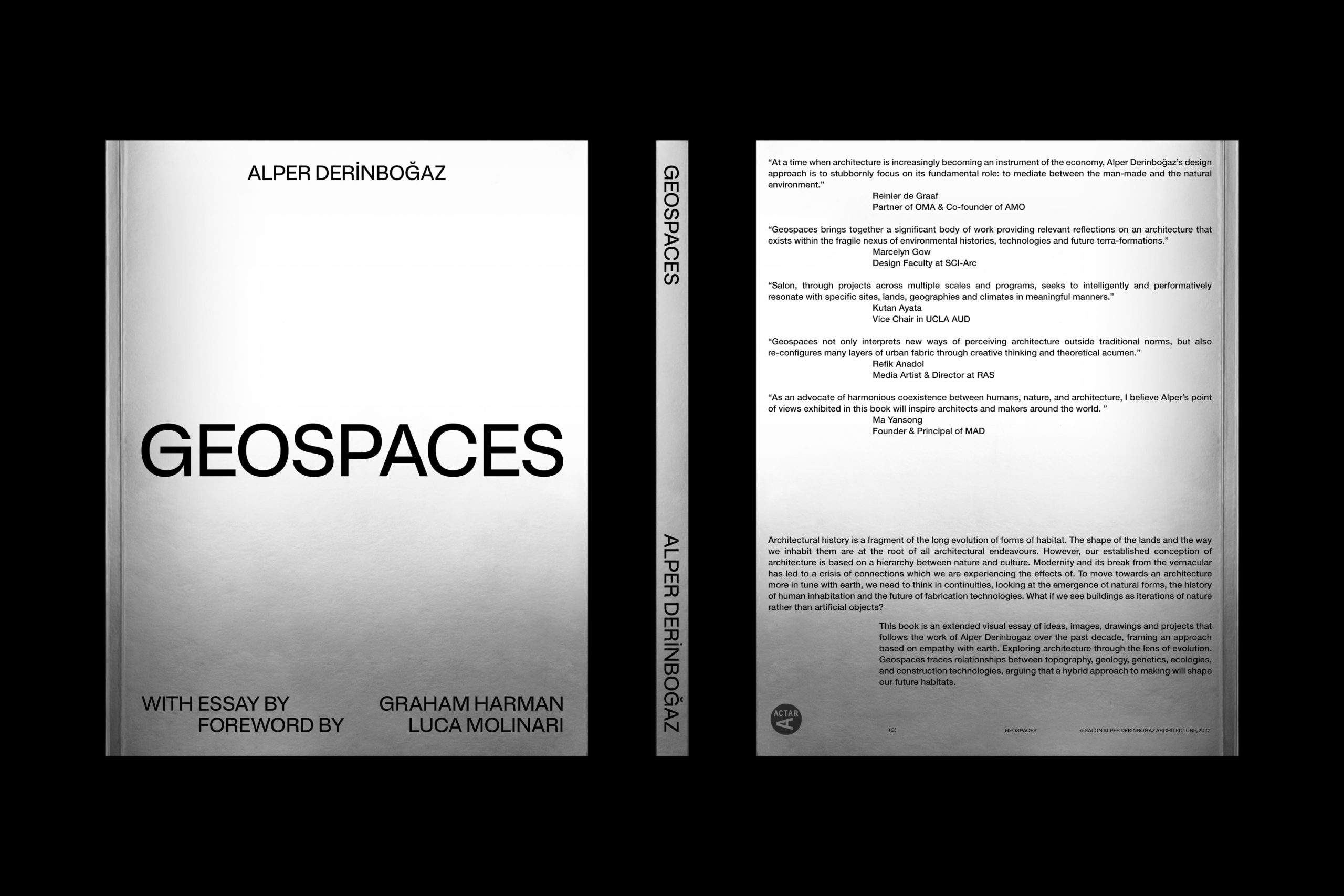 Geospaces is an extended visual essay of ideas, images, drawings and projects that follows the work of Alper Derinboğaz over the past decade, framing an approach based on empathy with the earth. The book underlines that modernity and its break from the vernacular has led to a crisis of connections. To move towards an architecture more in tune with earth. the book suggests thinking in continuities and looking at the emergence of natural forms, the history of human habitation, and the future of fabrication technologies.

The book launch event will feature a panel discussion with Derinboğaz, Ferda Kolatan, Michael Young, and Ariane Harrison on how buildings can be seen as iterations of nature rather than artificial objects.

About the Speakers:
Alper Derinbogaz is an architect and academic seeking communal relationships between environment and spatial elements through scientific strategies. His experiments vary from installations to cultural projects, including the new City Museum nearing compilation. Derinboğaz leads Salon, one of “the best young architecture practices” as listed by ArchDaily, besides his studio in ITU. Derinbogaz is a Fulbright Scholar and winner of the UCLA graduate award besides European “40 under 40”. His research has been exhibited in biennales and museums including the Koolhaas curated Venice Architecture Biennale in 2014 with his work Modalities of the Spontaneous, an in-depth study of the urban developments in relationship with geography. His projects won awards at the international architecture competitions from Songdo Library in Korea to Kaunas Science Island in Lithuania. His work and research are recognized as “inventive” explorations of the possibilities of the physical environment.

Ferda Kolatan is an Associate Professor of Architecture at the University of Pennsylvania Stuart Weitzman School of Design and the founding director of su11 in New York City. He received his Architectural Diploma with distinction from the RWTH Aachen in Germany and his Masters in Architecture from Columbia University, where he was awarded the LSL Memorial Prize and the Honor Award for Excellence in Design. Kolatan has lectured widely and taught design studios as well as theory and fabrication seminars at Columbia University, Cornell University, Rensselaer Polytechnic Institute, University of British Columbia, California College of the Arts, Washington University, Pratt Institute, and the RWTH Aachen. He is also a co-author of the book Meander: Variegating Architecture (Bentley Press, 2010) and was selected as a Young Society Leader by the American Turkish Society in 2011.

Michael Young is an architect and educator practicing in New York City where he is a founding partner of the architectural design studio Young & Ayata. Young & Ayata have received the Progressive Architecture award, the Design Vanguard Award, the Young Architects Prize, and a first-place prize for the design of the Bauhaus Museum in Dessau, Germany. Their work has been exhibited at the Museum of Modern Art-New York, the Istanbul Modern, the Graham Foundation, SCI-Arc and Princeton University. Michael has published numerous essays and the books The Estranged Object (Graham Foundation, 2015) and Reality Modeled After Images (Routledge, 2021). He was the 2019-20 Rome Prize Fellow at the American Academy in Rome.

Ariane Lourie Harrison is a Principal and co-founder of Harrison Atelier and a registered architect in New York State. She was a critic and lecturer at the Yale School of Architecture and Yale College from 2006 to 2017; she currently is the Coordinator of the Masters of Science in Architecture and Urban Design programs at the Graduate School of Architecture, Pratt Institute. Her projects and writing explore the concepts and realities of making architecture for multiple species, from her anthology Architectural Theories of the Environment: Posthuman Territory (Routledge, 2013) to “Feral Architecture,” in Aesthetics Equals Politics (MIT Press, 2019). Harrison Atelier has built several pavilions featuring cladding systems that accommodate multiple species. Currently under construction, the Pollinators Pavilion at Stone House Farm, Livingston, NY is a visitor center/field station that houses and monitors solitary bees with an innovative cladding system (awarded NYCML 2018 and Microsoft’s AI for the Earth grant 2019-20) fabricated in partnership with LafargeHolcim’s Ductal® Workshop.

COVID-19 vaccinations and face masks are strongly encouraged for all visitors. Read our full Health and Safety Protocol here.