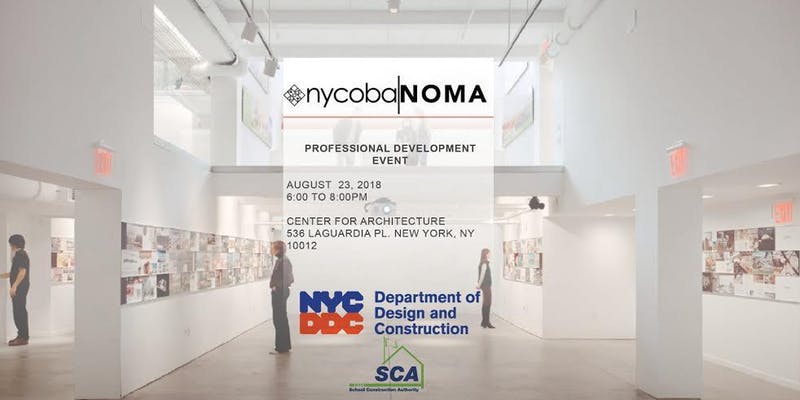 Join nycoba|NOMA at the Center for Architecture on Thursday, August 23rd for “Understanding New York City Agency Contracts & More: For All Design and Construction Professionals.” Topics include NYC design contracts and policy, the procurement progress, and the legal requirements of contracts.

David Varoli is the Deputy Commissioner and General Counsel for the New York City Department of Design and Construction. David previously served in the Mayor’s office of Contracts as Deputy Director for Integrity Review/Legal Affairs and General Counsel. Prior to that he served in the Housing Authority as Assistant General Counsel for Corporate Affairs, as well as having served in the Mayor’s Office of Construction as Deputy Director and General Counsel. Before coming to the City, David was a litigation associate with a law firm that focused on construction litigation. David received an LL.M. in Corporate Law and Taxation from Quinnipiac University School of Law, a J.D. from Pace University School of Law, and a B.S. in accounting and finance from Fordham University. The City’s Conflicts of Interest Board has honored David with its Oliensis Award for Ethics in City Government and the City’s Corporation Counsel’s Agency Counsel Recognition Award.

Connie Vasquez has 20 years of experience as a construction litigator. She recently joined the New York City School Construction Authority as a Principal Attorney. At the SCA, Vasquez works closely with the Construction Management Department handling a wide variety of issues such as license agreements, contract terminations, and mediations involving projects in Brooklyn, Manhattan, Queens, and Staten Island. Prior to joining the SCA, Vasquez was a Senior Attorney in the Construction Group of Pepper Hamilton LLP’s New York Office before moving into a role as Assistant General Counsel with a real estate development.

8/23/18, 6pm - 8pm
Location
Center for Architecture
Submit Your Event
Send us your architecture and design events for our "Elsewhere" calendar listings